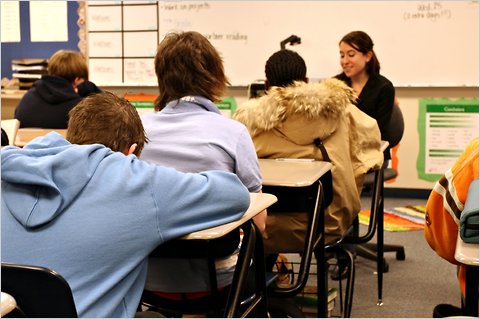 Is the class bully simply in need of a nap?

School bullies and children who are disruptive in class are twice as likely to show signs of sleep problems compared with well-behaved children, new research shows.

The findings, based on data collected from 341 Michigan elementary school children, suggests a novel approaching to solving school bullying. Currently, most efforts to curb bullying have focused on protecting victims as well as discipline and legal actions against the bullies. The new data suggests that the problem may be better addressed, at least in part, at the source, by paying attention to some of the unique health issues associated with aggressive behavior.

The University of Michigan study, which was published in the journal Sleep Medicine, collected data from parents on each child’s sleep habits and asked both parents and teachers to assess behavioral concerns. Among the 341 children studied, about a third were identified by parents or teachers as having problems with disruptive behavior or bullying.

The researchers found that children who had behavioral issues were twice as likely to have shown symptoms of sleep-disordered breathing, like snoring or daytime sleepiness. Among children whom parents specifically identified as school bullies, the finding was similar.

The lead author, Louise O’Brien, assistant professor of sleep medicine at the University of Michigan, cautioned that the study simply shows an association between sleep problems and bad behavior and doesn’t prove that sleep problems cause bullying. That said, other research has also found an association between behavioral problems and sleep apnea, a sleep disorder characterized by snoring and gasping for breath.

“We can’t look at cause and effect, but it certainly fits with the data that’s out in the literature already,” said Dr. O’Brien. “The hypothesis is that impaired sleep does affect areas of the brain. If that’s disrupted, then emotional regulation and decision-making capabilities are impaired.”

The fact that sleepiness was so predictive of behavioral issues has implications for all children, said Dr. O’Brien, and shows the important role that sleep plays in healthy child development.

“In this day and age, when we’re living in a 24-hour society, sleep is the first thing that gets lost,” she said.

Your health questions answered by Times journalists and experts.

Can You Safely Lose Weight While Breast-Feeding?

As Boys Get Fatter, Parents Worry One Body Part Is Too Small

Get Well's Running email for practical tips, expert advice, exclusive content and a bit of motivation delivered to your inbox every week to help you on your running journey. Coming soon.